← back to
New Amsterdam Records
Get fresh music recommendations delivered to your inbox every Friday.
We've updated our Terms of Use. You can review the changes here. 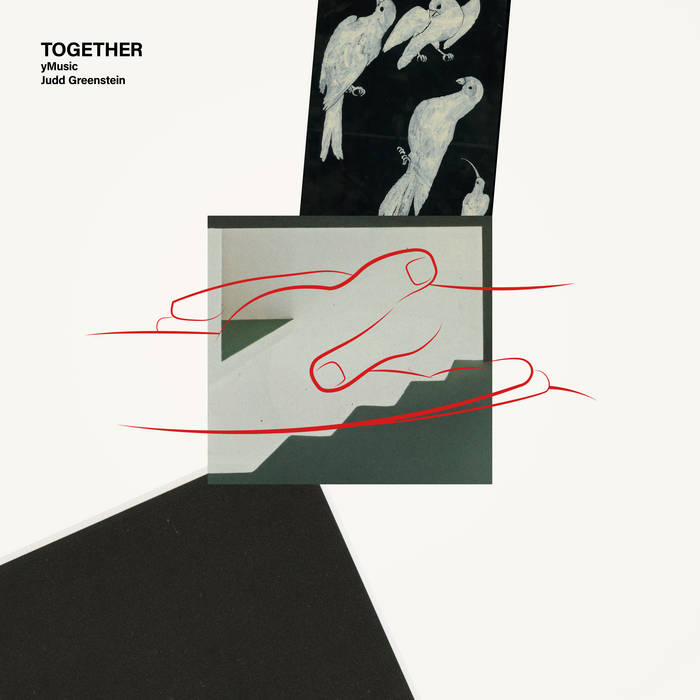 Bob Spector This should not work, but in this performance, it does: "The six players don’t need to be in sync, but move together through the movement as a kind of “cloud”..." It's richly melodic, and full of beautifully strange harmonies, in a flowing, parlando rhythm. If any music can be zaftig, this is. Favorite track: Together (full-length).

Ken Nielsen I’ve only done two listens and will do more.
So far I enjoy this music and YMusic’s performance of it very much.
It’s the kind of music that deserves concentration and thought.
Just what I prefer…
Well done Judd and all.

Out now on New Amsterdam Records, “Together” is the new 14-minute single from Judd Greenstein, a composer whose music is “beautifully wrought and consistently appealing” (The New York Times), and yMusic, “six contemporary classical polymaths who playfully overstep the boundaries of musical genres” (The New Yorker). “Together” is Greenstein’s first piece for yMusic since his widely acclaimed work “Clearing, Dawn, Dance” arrived a decade ago.

“‘Together’ was originally commissioned as a new chamber work for yMusic, some of my oldest and dearest collaborators,” says Greenstein. “When Covid shut down the world, and yMusic was unable to come together to perform or even rehearse, I rewrote the first movement as a piece that could be performed over video, from wherever the individual members were. The six players don’t need to be in sync, but move together through the movement as a kind of “cloud”—together, but not precisely together. The second and third movements were meant to be performed once the band was able to be in the same space again, and as the piece goes on, more and more ‘togetherness’ takes hold. In February, around the time of this release, yMusic will finally play ‘Together’ for the first time, together, and it’s going to be a really cathartic moment for us all.”

Filmmaker Adam Larsen, working alongside choreographer Sue Schroeder, created the video for “Together.”

”Listening to Judd’s composition, I experimented with a variety of images to see which best supported the music,” says Larsen. “I quickly realized that the human form and gesture provided the feeling and intent I wanted to express, so I invited my friend, choreographer, Sue Schroeder, to collaborate. My vision was to film four to five dancers both inside and outside their homes as they interpreted the ideas of what togetherness and separateness has meant to them during this past year. Sue and I worked on movement concepts and ideas—considering, at times, incredibly calm energies like living portraits and, at other times, more dynamic actions. As we filmed, we shifted from very personal solos to group movement. Through this process—and without touch—the dancers explored the spaces both within and between themselves, eventually finding togetherness.”